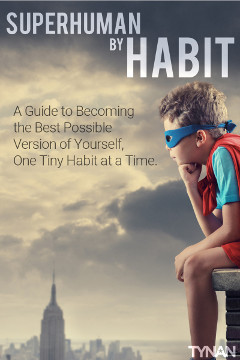 What's the Point of Being a Minimalist?

Minimalism has been on my mind for a few reasons recently. First, I bought a motorcycle. If minimalism were a religion, I'd probably be excommunicated for having more motorized vehicles than I have pairs of socks (RV, motorcycle, folding scooter, and electric skateboard vs. two pairs of socks). Second, I had a long conversation with Leo Babauta about minimalism, which brought it from the background of my life to a concept actually examined and discussed. And last, Erica twittered a video about minimalism that's clearly a parody, but makes some valid points along the way.

I sat at a poker table for a few hours tonight and got the coldest run of cards I've had since I can remember. I didn't lose a lot, I just sat there and folded everything. All that time that I WASN'T spending outfoxing my opponents and pulling down monster pots was spent thinking about why I became a minimalist, why I've stayed a minimalist, and what the point of it all is.

I became a minimalist on a lark, which, for better or worse, is why I do a lot of things. I bought an RV, thinking I'd take road trips in it, and from that point on I never slept in my condo again, and I started selling everything. Momentum kept pushing me, and before I knew it I didn't own anything that didn't fit in my 28 liter backpack.

Why I Sold My Berkshire Hathaway Stock

I logged into my stock account the other day and realized that contrary to my previous claim/strategy of investing solely in Warren Buffet's Berkshire Hathaway, I had no Berkshire shares left. Time for an update, I reckon.

So what happened? Nothing against Berkshire, for sure. I sold almost all of my shares at a profit, and I still have full faith in the company. But sometimes opportunities come along that are too good to pass up, two of which I'm currently invested in.

The Risks I Take

A couple people recently have asked about the risks I take. On one hand, as they point out, I play it extremely safe by eating healthy foods and abstaining from alcohol and drugs. On the other hand, I climb construction cranes and go skydiving. Isn't this a contradiction?

It isn't - at least in my "eccentric" way of thinking. The difference is that one type of risk is an incidental risk, and the other is a sustained risk. I'm not really concerned with how dangerous a particular activity is. I know that jumping onto a moving freight train is more dangerous than eating a cookie. I'm worried on the "expected value" of the event. In other words, the average harm per hour times the amount of hours I'll be doing the activity.

If I climb a radio tower, there's a very small chance that I'll kill myself doing so. I don't mind taking that risk, though, because I'm only going to spend a total of ten hours or so doing it in my entire life. The odds probably won't catch up with me.

Three First Lessons and What You Need to Know About Them

Last week I went skydiving. It was actually my fourth time going, but since I hadn't been in a couple years, they made me take the training again.

After skydiving, my friends and I went to an arcade. I don't really like arcade games (besides H2Overdrive), so I wandered around until I found one called "Commercial Airline Simulator". You may be surprised to know that no line had formed in front of that particular machine. I played through the entire training mode of it, and was pleasantly surprised at how similar it was to when I flew a plane a few years prior when I took a couple pilot lessons.

The following weekend I took motorcycle classes and got my license. Around that time I started thinking about how awesome first lessons are-particularly those that were swimming around in my mind.

Today I was walking home from a rousing game of Rummikub with some friends. I mentioned that my phone was at critbatts, a strange shortened version of slang that Todd and I use, which means "critical batteries". To give credit where it's due, our good friend Elliot actually invented that particular phrase. Until that, we'd only used maxbatts, modbatts, minbatts, and nilbatts.

Anyway, after explaining what critbatts meant, I  told my friends about a time in Thailand when Todd was running out of Thai money, Baht, and declared that he was at critbahts. We got a good chuckle out of it since critbatts had since become nearly an everyday word, especially given our use of GPS and such on our phones.

I then remarked that to hit critbahts is difficult, because the money is worth so little - less than monopoly, I joked - that it was almost impossible to run out. Wait a minute.. maybe that's not a joke. Maybe Baht really are worth less than Monopoly money. Math followed shortly after.

New Year's eve is approaching, which means that people are making their New Years' resolutions and asking me what mine are. I don't have any, and I think that's a good thing.

The problem with New Years Resolutions is that they're not motivated by a burning desire to change. Wee all know that most people don't really change, and we know how hard it is for us to change ourselves. The only fuel powerful enough to push through that pain period is the burning desire for results. New Year's resolutions don't have that burning desire. Instead we realize it's a new year, get the fluffy feeling that a fresh start is upon us, and then scramble to make up New Year's resolutions. That method of change is about as effective as the US' "war on drugs" is against drug addiction.

How motivated can you possibly be if you're willing to wait until the ball drops before taking action? Not very. I have a friend who is capable of, and has executed on many occasions, 180 degree life changes. On a normal day if he told me he was going to do something difficult, I'd have full faith in him. But he recently picked up smoking and told me he's quitting for New Year's. I bet he won't. Quitting cigarettes requires a fundamental hatred for the effects smoking has on your body and life. Anything less is a break from smoking. If he had that harsh emotion, he wouldn't be smoking today.

I 'm a bit under the weather today, which for some reason makes me want to write something fun and useless. Behold three little stories of childhood crushes.

The first girl I had a crush on was named Keely. I got my mom to take me to a toy store to buy her a present (a troll doll), which I then left on her desk. Anonymously, I think. I'm pretty sure that we were eventually "dating", but it's hard to remember since "dating" was just a title back then.

You Aren't What You Buy

When I was in college, I bought a Rolex. In the week or so that I waited for it to come in the mail, I got really excited about the idea that I was going to have a Rolex. To me, someone who had a Rolex was a different type of person, simply because he bought a fancy watch.

The watch showed up, and it was obviously a fake. I took it to a jeweler, just in case, and he confirmed what I already knew.

But by then it was too late. In my head, I was a Rolex type of guy. So I bought another one-- a real one this time.

Throwing Yourself a Softball

I got a present today and it's not even my birthday or Christmas. That present came from myself, and it came in the form of a half written blog post and the title for another one (this post here, in fact).

Since implementing the no computer after 11 rule (which, I'll admit, I'm not totally strict about since adopting the thousand word a day mandate), I've noticed that I leave myself these sorts of presents a lot more often than I used to.

The gift I'm talking about is a productivity softball. Normally when I sit down for my daily thousand, the first fifteen minutes is spent battling the impulse to go see what's new on hackernews, and, once that impulse is controlled, staring off into space trying to decide what to write about today.