We've been in Panama for two days now, but it seems like weeks. There's obviously still TONS to explore around the city, but I'm already comfortable here and it even feels a bit familiar.

First of all, I love it. For me it has the ideal balance between chaos and structure. It's very safe... people are at least as friendly as they are in the US, if not moreso. They go out of their way to help us and put up with our mediocre Spanish. Our hotel right now isn't in a great area (though not a bad one either), and I feel totally safe walking a few blocks to go to a diner.
Even though it's safe, there don't seem to be a lot of minor enforced rules. Taxi drivers ignore speed limits and stop signs. The drinking and gambling age is 18, but I've heard even that's not enforced. You don't get the feeling that you're being overprotected or treated like a child.

The food has been MUCH better than expected. There are several vegetarian cafeterias that we've found already which are incredibly good and cheap. The one we visited tonight was owned by a very friendly Chinese couple (have you ever heard Chinese people speak Spanish?). There were maybe forty different dishes they had, and a serving of any one was only fifty cents. I asked for orange juice without sugar (most fruit drinks here have sugar) and they fresh squeezed it for me for only $1!

My entire meal, including two glasses of nearly the most delicious orange juice I've ever had cost $5.50.

The lima beans and patacones (plantains!) were particularly delicious. 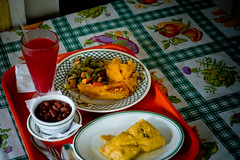 TONS of places are open late here. Anywhere in the city you can walk a few blocks and find a diner with a HUGE selection of cheap and decent food 24/7. Even that awesome vegetarian restaurant is open until 11pm!

At first we'd get charged $5-6 for every taxi ride. That doesn't sound like a lot, but taxis are the primary way to get around here. You can easily end up spending $30 this way every day just hopping from place to place. This surprised me, however, because I'd heard that they were only $1-2.

So we tried an experiment.

It was the furthest taxi ride we'd had, other than the airport ride. We asked how much and he said in Spanish, "two dollars.... is that ok?". 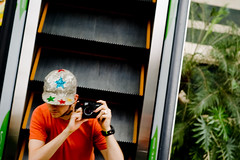 Since then we've adopted the strategy of NOT asking how much the taxi costs and just handing them two dollars. No complaints. That's how non gringos do it, I bet.

I haven't spoken Spanish in years, and I've totally forgotten how to conjugate all the tenses, but I remember a surprising amount of Spanish. We talk to everyone in Spanish. We went through the process of getting SIM cards for our phones in Spanish. We order our food in Spanish. Tonight we had a conversation with our waitress about her kids in Spanish.

I'd say that my Spanish is at the baseline for what's necessary to live in Latin America. Definitely nothing impressive, but enough to get by. To make sure that we learn the most possible, Todd and I speak to each other in Spanish as much as possible. I've just put a dictionary on my phone too, so I can learn new words as I need to. 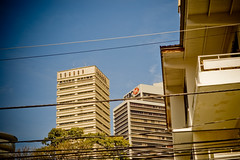 We still haven't settled down, but we have a few good leads for apartments now. I think we'll move into one in the next few days. The first night we stayed at a gringo hotel, and it was embarassing. I was embarassed to even talk to the staff there because every conversation had the subtext of "I'm an idiot tourist."

Now we're staying at a hotel that's nearly as nice and less than 1/3 of the price of the other one. We went up to the roof and we met some guys from Venezuela who are staying here too. The other people on the roof looked to be Panamanian, or at least hispanic.

I'm looking forward to getting a little more settled. I haven't had a refrigerator in nine months, so that seems very exciting to me. The internet situation is ok here, but not great. Working on sites is annoying and I can't get VOIP calls working (although I DO have a US number that forwards here for only 9 cents a minute!). All of the apartments we're considering have high speed internet.

A side thought: I got a LOT of money for selling my stuff. Not millions or anything, but more than enough to pay for this year if you include my car. I lived in an RV, too, so it's not like I had a mansion full of fine art and golden ponies to sell. It's another answer for the "I could never afford that" complaint. Sell your stuff, spend the year learning how to make money on the internet, and live the life you dream of (if you dream of traveling the world and becoming financially independent).

We Found an Apartment!

Todd and I have a tendency to not plan anything. Last year when we went to Japan we had no plans and nowhere to stay when we landed there.

Life Nomadic 2008 is no different.

Before we left I spent a considerable amount of time trying to find a an apartment to rent online. We even worked through Century 21 here in Panama, which turned out to be a colossal disappointment. They found us a place, but then when we got here they skipped on a meeting they were supposed to have with us and then said, "Sorry! He doesn't want to rent it short term anymore."

Pizza, Sushi, & Casados: All about FOOD in Costa Rica

When we picked what country we were going to go to though I did have some concerns about feeding the kids as well as myself. I'm not a picky eater, I just want my food to be tasty and preferably healthy. And, I'm not really that interested in being overly exotic. New kinds of fresh fish or veggies to try? Sure! Innards and insects? Not so much.

Our first dining experience in Costa Rica was...yep, pizza! Lonely Planet is right in Playa Coco and has a really fun and funky coffeehouse meets bar meets island pizza joint feel. The service was amazing, and the pizza was pretty awesome too. Costa Rican pizza (which is way more common than you'd think) is very thin crust and a much lighter meal than you'd find in the US. Everything is in moderation and you don't feel like a stuffed whale after you eat it. A lot of the pizza is wood fired, which, depending on the restaurant, adds a nice smokiness to the whole dish. If pizza seems too western to you though, there are always other great choices on the menu at the restaurants here that are familiar but with a local flair.

I highly recommend trying some new toppings-these next pictures are from an INCREDIBLE pizza and sushi (yes, you read that right) restaurant called Donde Johann. It's owned by a French expat and not only is the food great, but his whole restaurant concept is very cool. Local ingredients used in a way that is familiar to our Western tastebuds but that still makes the most of Costa Rican flavors.

This pizza had artichokes, locally smoked ham, and mushrooms. Easily one of the most delicious pizzas I've ever encountered. It was crispy and chewy and had a fantastic balance of toppings. You can see the cheese pizza in the background that we got for the kiddos as well.