My one and only concern before beginning the trip was that I might have to give up my diet. Those of you who read my person blog know that I eat Vegan and also avoid processed flour and sugar. Todd has also pretty much adopted this diet. For the curious, we eat like that because the most current scientific studies of diet have shown that to be the healthiest diet possible.

The mental discipline of sticking to the diet isn't difficult after a month or two, but finding acceptable restaurants can be quite tricky.

In Austin, TX we ate primarily at three restaurants: Casa De Luz (hi guys!), Mother's (hi ladies!), and Magnolia Cafe (hi ladies!). I don't know if a single day has passed in the past year where I was in Austin but didn't eat a meal at one of those restaurants.

Anyway, whenever I'd travel within the US, it was nearly impossible to find healthy restaurants. I'd rely, for the most part, on Whole Foods to get supplies to make my own food.

Panama doesn't have Whole Foods, though.

The first night we got here we ate Salmon. It was late and we couldn't find any healthy restaurants. To be totally honest, we didn't really look because we weren't sure they existed.

Over the next couple days we began our quest, and were very pleasantly surprised. We've been here for over a week now and eat healthy meals every day. I hate to say it, but these restaurants rival our favorites back in Austin. 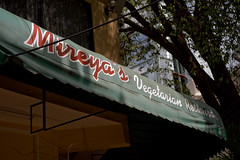 We got lucky finding this one. The first night when we ate our Salmon we saw this place, closed, across the street and planned to check it out the next day.

It's like a cafeteria... they have around 20 different dishes, ranging in price from $.30 to $1.25 for a portion. You go down the line and pick all of the things you want, and you end up with a pretty huge meal for around $5.50.

Some of my favorite things here are the Eggplant Delight, which is like a vegan eggplant lasagna, the boiled pumpkin, brown rice and beans, and the absolute best... "Plantain Temptation". 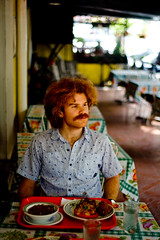 Every restaurant here has plantains. They're so good. They're sweet but low glycemic, and very satisfying. Sort of like a tropical sweet potato. The Plantain Temptation is a dessert which is just baked plantains covered with honey. MMMMMMMMMMMMMM

What's totally remarkable about Mireya's is the service. As soon as we step to the counter to check out the daily offering (the dishes change every day), he gets us trays and silverware. While we pay he carries our trays outside where we eat. As we finish each individual dish he comes by and takes it away.

Another casa in my life?

Casa Vegetariana is owned by a Chinese couple. The woman perpetually has a smile on her face which indicates that today is the best day of her life. 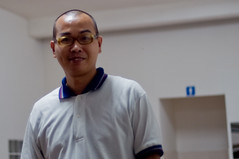 There are two things that make Casa Vegetariana amazing. First, they're open until 11pm. We always want to eat late, so that works out very well.

Second, they have the best orange juice in the land. For just one dollar they hand squeeze you a large glass of the freshest orange juice you've ever tasted. Words can't express how good this stuff is. At first they'd strain the pulp out, but now that they know that we like pulp, it's like drinking a dozen whole oranges. 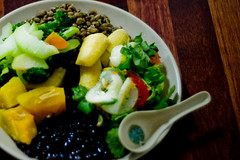 Equally spectacular is the price. Every portion of food is only $.50! Including the juice of the gods it's hard to spend more than $4 here.

Organica is like a shrunken down (to the size of a living room) Whole Foods. It's not nearly as good and the prices are insanely high ($6.75 for a loaf of good bread), but... it's the only place to get healthy groceries around here.

Super 99 is the big supermarket (like HEB or Safeway) around here, and it's excellent. The selection is at least as good as any US grocery store, and has more healthy stuff than most of them. Actually, we went there right after Organica, and found several of the same items at much better prices. 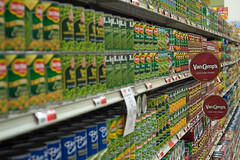 We have to go back to the grocery store today because we've been eating black beans and rice and we've run out of black beans.

From Carnivore to Vegan Overnight

I've mentioned before that I have become a vegan. It's now had such an impact on my life that I'm going to write a whole post explaining why on earth I'd become a vegan, and why I'll be a vegan for life.

First, I should say that the term "vegan" isn't great. It's usually associated with freakshows who are so against killing animals that they won't wear leather. While I'm not going to frequent cockfights or go hunting, I have no problem with animals being killed. I like leather stuff, and animals dying is part of life with or without humans.

Another problem with the term "vegan" is that many vegans eat an unhealthy diet. They cut out meat, but don't add vegetables in their place, so they tend to eat a lot of refined grains. Doing that is more unhealthy than just eating meat.

Pizza, Sushi, & Casados: All about FOOD in Costa Rica

When we picked what country we were going to go to though I did have some concerns about feeding the kids as well as myself. I'm not a picky eater, I just want my food to be tasty and preferably healthy. And, I'm not really that interested in being overly exotic. New kinds of fresh fish or veggies to try? Sure! Innards and insects? Not so much.

Our first dining experience in Costa Rica was...yep, pizza! Lonely Planet is right in Playa Coco and has a really fun and funky coffeehouse meets bar meets island pizza joint feel. The service was amazing, and the pizza was pretty awesome too. Costa Rican pizza (which is way more common than you'd think) is very thin crust and a much lighter meal than you'd find in the US. Everything is in moderation and you don't feel like a stuffed whale after you eat it. A lot of the pizza is wood fired, which, depending on the restaurant, adds a nice smokiness to the whole dish. If pizza seems too western to you though, there are always other great choices on the menu at the restaurants here that are familiar but with a local flair.

I highly recommend trying some new toppings-these next pictures are from an INCREDIBLE pizza and sushi (yes, you read that right) restaurant called Donde Johann. It's owned by a French expat and not only is the food great, but his whole restaurant concept is very cool. Local ingredients used in a way that is familiar to our Western tastebuds but that still makes the most of Costa Rican flavors.

This pizza had artichokes, locally smoked ham, and mushrooms. Easily one of the most delicious pizzas I've ever encountered. It was crispy and chewy and had a fantastic balance of toppings. You can see the cheese pizza in the background that we got for the kiddos as well.