Jose, our friend and the guy who rented our apartment to us, is a Spanish teacher here in Panama. He comes over a couple times a week and hangs out with us. It's business and pleasure - we learn Spanish from him and we teach him about online business. He's a lot more of an expert in his field than we are in ours.

Last week he told us about a couple he teaches here. The guy, Peep (pronounced 'Pep') is from Estonia, and the girl, Sarah, is from Austin! We called them up and planned to hang out one night.

They live in Casco Viejo - "The Old City". Todd and I kept intending to go visit Casco Viejo, but never got around to it. Unless there's a moderate amount of pressure, you can't ply us from our work.

On the map Casco Viejo looked too far away from the city to live in, so we never considered it. As we rode in the Taxi to visit Peep and Sarah we realized that may have been a mistake. 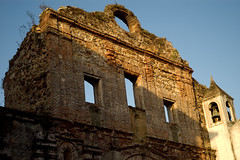 We drove past shoddy street food carts and past a highway overpass, and were magically transported to another land. It was as if we had entered a time machine set for a hundred years prior.

The asphalt ended abruptly and gave way to a worn red brick street with a steel train rail running down the middle. The road became a single lane, which would have been a problem if homeless people didn't direct traffic, hoping to get a quarter or two for their troubles. 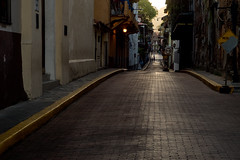 The buildings were beautiful in different ways. Some were old, built around the turn of the century. Others were new, but run down with character. Both types were next to each other. 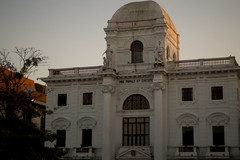 We met up with Peep and Sarah and they gave us a short walking tour of the area. Stray cats and dog lounge on the sidewalk, occasionally chasing each other. 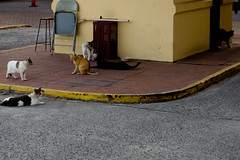 Casco Viejo, we learned, used to be the best part of Panama. In fact, the house that Peep and Sarah are renting rooms in belonged to the first President of Panama! Over time it became dangerous and was largely abandoned. In recent history a revival effort began to restore the area to its former glory.

Casco Viejo has water on two sides of it, so you can look down alleys and see the ocean. From the huge concrete rooftop gazebo at the former President's mansion we could see the sun set over the ocean and the Canal. 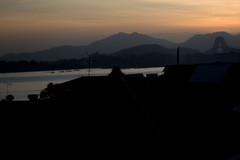 I have the feeling that I know where we'll rent next year. 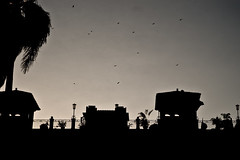 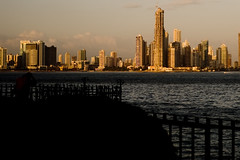 Boy, what an exciting title!

We've been here for almost two weeks. Living in a new place makes you notice all of the little things. Things that would never be written in a guidebook, because they're too insignificant, but together create the atmosphere you live in.

We haven't had much of a chance to go out and see the sights. We spend most of the day in the living room working. We eat almonds and drink water, and listen to the traffic below us.

On The Lunde Adoption Blog 2014

This is the first photo of me in Colombia since my adoption five years ago. It was taken yesterday (on Day 2) at the exit from the airport.

Day 2 had a good start and a good finish, it was just the middle part that was very boring. Stepping off a long, slightly delayed flight, consisting of 11 hours crammed into a small, 275-seat Airbus 340 (as opposed to a Boeing 747, like last time, or even an Airbus 380), we were met at the airport by the same driver who had picked up my parents when they came to Colombia in 2009 to adopt me: The always smiling, always helpful Reinaldo Daza! He made us feel relaxed and safe by speaking only Norwegian with us! (In Colombia, unlike the part of the world where we live, people generally don't understand any English. You're lucky if you meet someone who can speak it with any fluency. Body language and a handful of Spanish words will usually get you much further.)

Reinaldo took us to the hotel. On the way he told us that there are already three other Norwegian couples there, each one with a little child that they are in the process of adopting!

The hotel is quite nice. We have a "de luxe" apartment on the 5th floor, with our own kitchen, two bathrooms, and even a fireplace in the living room (not that we need it!).